Woman, nude, is the blue sky. Clouds and garments are an obstacle to contemplation. Beauty and infinity would be gazed upon unveiled... 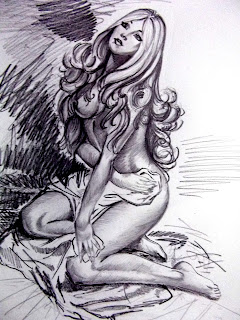 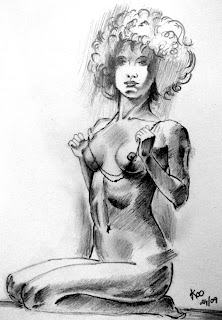 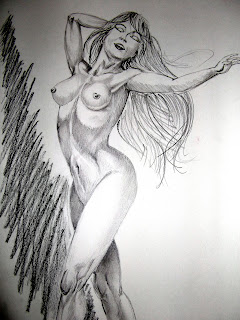 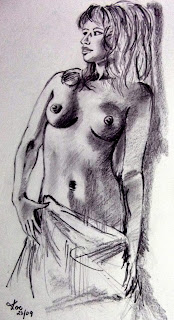 Never thought the very presence would irk, negativity filled to the brim..

Imagine an eruption of all those pent up feelings....razing an array of dreams...they leave you with nothing...

But is this the end or is there more to follow...

Lying all alone in an empty dark room, she sits aloof cogitating about the same...
Posted by Marooned at 9:09 PM 1 comment:

Let me in there. Will you? 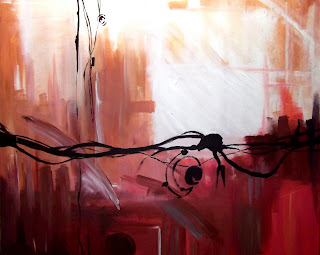 Posted by Marooned at 8:35 PM No comments: 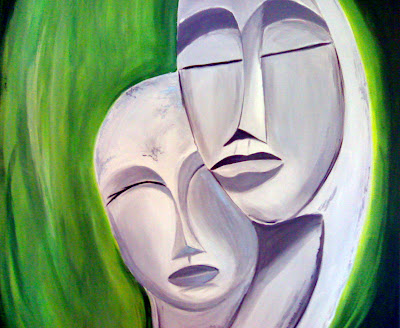 Posted by Marooned at 8:24 PM No comments:

“Until this moment, I never understood how hard it is to lose something you never had.”
Posted by Marooned at 2:34 AM 1 comment:

Deta, where art thou

The God and weight of my world,
Sans you, everything is so hollow;
Why have you left me alone,
Don't you know, the world out there is waiting to swallow...


The inexpressible comfort of feeling safe with you,
Having neither to weigh thoughts nor measure words,
Pouring them all out just as they are,
Chaff and grain together,
Certain that your hand will take and sift them,
Keep what is worth keeping,
And with a breath of kindness blow the rest away...
Who else can do that anyway?

I pray to thee,
Wherever you may be;
Come to me and talk to me,
Coz' sans you i don't wish to be!!

I miss you Deta. It's been more than two months now and I'm still waiting for you to come and talk to me in my dreams.

Don't you miss me?
Don't to wish to talk, share, laugh and cry with me?

Please don't make me wait any longer coz' its a punishment for me!!
Posted by Marooned at 3:39 PM 1 comment:


From Bob Dylan's 'you're a big girl now' to Train's 'hopelessly' to Natalie Imbruglia's 'torn' to Incubus's 'whatever tomorrow brings', weapons they all seemed to be for the time that they played and i hum along...but a novice in  fighting the emozionale battaglia, i surrendered. Slaughtered, hopelessly i surrender!

I can't unthink about you
I can't unfeel your touch

I can't unhear all the words

Unsay all the things

That used to mean so much

I wish I could unremember

Everything my heart's been through

I'm finding out it's impossible to do

I can't unlove you

Until when do i fight?

Posted by Marooned at 3:46 AM No comments: 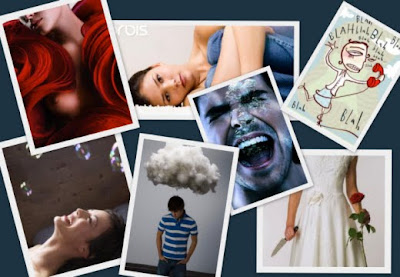 Clinquant they all seem from the crest

Blinding you all through

Is the blissfully sexy you


O, How much has to be explored and discarded before reaching the naked flesh of 'feeling'

Joe ~ ..Koo ba, believe me there is a bhoot living in this house. Let me tell you what I witnessed today...the pizza delivery boy was home(rats running down through his throat) and I opened the door to make the payment. made the payment (eyelids fluttering like a ribbon tied to the side view mirror of your baby when zooming at the speed of 120kms/hr...woo hoo!!)...a deep breath....went up to the table to keep the pizza and walked back to the door to latch it...believe me Koo ba, the door was latched and locked.....Someone locked the door!! what do you have to say....I smile, Abhilaash ..ummm..i forgot his reaction...and i tell him...baby..you must have locked it and forgot...chill!...but he went on...nooo Koo ba, you ain't listening!...O.K..i say, what is it then? he says...bhoot ase ei ghortut!!....okum..i say then and we move on with other talks......

This was the first time my bhoot's presence was felt!!

A week or two lapsed after that and then this conversation...

(the three musketeers relaxing after a long day)

Varij ~ bhai, tu believe nahin karega mere saath kya hua..parso raat ki baat hain...it was about 2:30am...I was fast asleep, was sleeping on my chest...and I suddenly woke up to a rustling sound...like someone was rubbing his or her palm vigorously over the bed sheet....looks at me..Koo, are you sure you want to listen to this, tere karan hi tum logon ko nahin bataunga socha tha, but then could not keep it inside for longer :P... accha sun le :)....

haan toh, I woke up but was not stark awake as I was really tired that day...my eyes were half open and I felt someone was strangling me..matlab...Koo, yaar mere sar pe koi khada tha!!..there was someone standing right there on top of my head....i wanted to see who, but could not move, was held around tight by someone..and then...the worst part.....

My left hand was was held back very tight, perpendicular to my body...maine socha..ben'chod yeh hain kaun....Bumon or Joe is who i thought it would be...and maine toh soch liya, le lunga inka aaj!!!

I don't know for what reason, but I did not yell out their names....struggled to free my hand....and then within seconds, my hand came flying down..i could feel someone releasing my wrist!..maine idhar udhar dekha but could not see anybody. yaar, abhi bhi mere rongte khade ho rahein hain...phew!!

I don't know what that was but it definitely was not a dream!!

We did get curious about our new flat mate..though not to the extent of discussing about him/her until .............

(preface : Koo has been going through severe mood swings and is in a rotten mood. She goes picks up Abhilaash from office...gets offended about a very sane casual statement Abhilaash made. For no rhyme or reason decides to let initial insomnia to take the upper hand. Anxious as she lies, the gentleman makes his presence felt, sorts issues and they finally sit back relaxed, smoking their goodnight cigarette together .)

Khat, click, creeekkk...Koo hears it, and immediately looks towards the room's door..sees nobody! 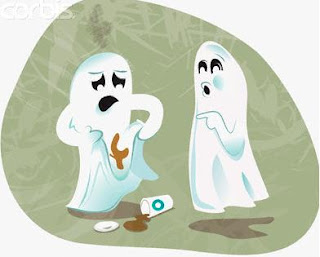 A late Sunday afternoon...while I still twist & twirl around on my bed, Abhilaash is on his toes, heating tea in the kitchen....beep, beep beep....3mins is what he sets the microwave timer at.

Within a couple of minutes Abhilaash is there with two cups of tea, his neck tilted as he's talking to aunty over the phone, in the same time trying to read the newspaper as well!!

As I lazily run my eyes through the newspaper, sipping in on rich ginger flavored assam tea, i get distracted ~ By the same beep beep beep sound. I say nothing as Abhilaash is involved in a serious conversation with his mom. After a minute or two, we both hear the sound of a lighter being lit..the click. Abhilaash walks out of the room to check if Varij is back. Varij...Varij....aa gaya kya tu??....there was no Varij there!!.... He headed towards the kitchen and then back to the bedroom....looked amazed, sat in front of me with a zillion lines on his forehead.

I slowly said..boy i heard the beep sound you get to hear while setting time in a microwave. And, he immediately said...wtf!!, Koo i just came from the kitchen and the microwave was on, time showing 23 mins...there was nothing inside though, and abhi microwave kharab ho gaya!!!

Disgusted we were, more than scared or curious!! coz' the microwave was gone :(

But yes, how would it even have been possible for the hungry bhoot to have anything visible??

Today, as we sit and talk about our new flatmate, my two adorable friends keep hoping its a sexy succubus who would sweep them off their feet, while I keep hoping it to be someone close to casper.

For now, lets wait and watch what bhoot turns out to be like...!!!

Posted by Marooned at 4:35 PM No comments:

sans you, no moi

Too often we underestimate the power of a touch, a smile, a kind word, a listening ear, an honest compliment, or the smallest act of caring, all of which have the potential to turn a life around. In the hustle & bustle of life, in the chase for a perfect life, we tend to become selfish, so selfish that we take them for granted. Yet they’re there, always there....

I love you both and I thank ma & deta for gifting me the most adorable siblings ever!!

love me, leave me not

Posted by Marooned at 1:22 AM No comments:

The optimist sees the rose and not its thorns; the pessimist stares at the thorns, oblivious to the rose 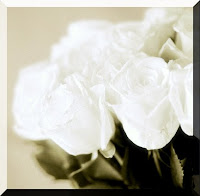 What was I staring at??


...Netiher the rose nor the thorns! Was it because I was oblivious of the white beauty by my bedside, or was it the allegory behind it?

Owing to a bemused mind I lay awake the whole night...only to further torture myself;

But it could not last long...coz'
His one touch, one look helped me dispel it all!!
"I hold it true, whate'er befall;
I feel it, when I sorrow most;
'Tis better to have loved and lost Than never to have loved at all."
Posted by Marooned at 6:12 PM No comments: 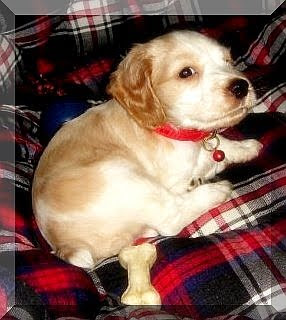 Your absence has gone through me
Like thread through a needle
Everything I do is stitched with its color.
~W.S. Merwin
Posted by Marooned at 5:36 PM No comments:

Cogitating about the life of a monk

Life is such that it does not even leave scope to complain sometimes. Complacency creeps in silently and life moves on. Such are the times today. No time to think & ponder over all that happened during the day; no time to share with your loved ones, the frivolous matters that give you joy; no time to think of anything but ways of conquering the kingdom of materialistic pleasures. Is this what i seek? Or is it the life of a monk that i would find peace in....O my god! why can't there be a balance, why has it got to be extremes!! In pursuit of solace, I move on.

An exquisite collation of words & thoughts by William Henry Davies is what i leave you with...

What is this life if, full of care,
We have no time to stand and stare.

No time to stand beneath the boughs
And stare as long as sheep or cows.

No time to see, when woods we pass,
Where squirrels hide their nuts in grass.

No time to see, in broad daylight,
Streams full of stars like skies at night.

No time to turn at Beauty’s glance,
And watch her feet, how they can dance.

No time to wait till her mouth can
Enrich that smile her eyes began.

The basic ingredient of a Hedonist's life

Time & again i've wondered why the negative connotation to the word "EGOISM"?? Ratiocination supplemented by substantive discussions with a couple of friends and a peep into a few articles here and there has finally helped me form an opinion.

Egoism ~ the principle that we should each act so as to promote our own interests and the advantage of such a position is that it avoids any possible conflict between morality and self-interest; if it is rational for us to pursue our own interest, the rationality of morality is equally clear. Morality aint compromised if it is not altruism!! Is there anybody out there to negate this?

Sans egoism, there cannot be altruism...oxymoronic you may say, but how would you invest your interest in others without working on them in the first place?

I happend to bump into this preaching by Sri Sathya Sai Baba - “All religions teach one basic discipline - the removal from the mind of the blemish of egoism, of running after little joys.”. I am not an atheist but i choose to be an infidel if this is what religion has to teach me.....
Posted by Marooned at 11:58 AM No comments:

the 'raqs sharqi'. A dream held on to for a long time, finally transcending into reality!!...something so tantalizing, it titillates......
Posted by Marooned at 8:47 PM 1 comment:

...in magic moments, by the cranberry rivulet with exotic yellow light enveloping us

"A memory is what is left when something happens and does not completely unhappen" ~Edward de Bono
Posted by Marooned at 1:56 AM No comments: